Venture Capital (VC) is frequently referred to in entrepreneurial circles.  It has a powerful hold on our perception of what ‘good’ entrepreneurship looks like due to its roots in Silicon Valley & the tech world.

This series of articles explains what VC is, where it came from, and the “can’t live with, can’t live without” relationship between AgTech and this type of finance.

At its heart, VC is a type of investment. Money (capital) is invested in young companies (ventures) in exchange for an equity stake which is expected to increase in value. The owners of the capital (the Limited Partners) are usually organisations like endowments, pension funds, family offices and foundations.

Deciding which young companies receive the investment and overseeing the investments is the work of the General Partners, the Venture Capitalists.  VC investing is high risk – young companies often fail. With high risk, a high return is expected: perhaps around 15%, or 3-5% outperformance of the public markets.

The model was developed in California around Silicon Valley, where in the 1970s-1990s VC firms (such as Kleiner Perkins Caufield & Byers) made huge returns backing start-ups that became household names.  It is not an overstatement to say that most of the technology and internet giants of today were beneficiaries of this model – Facebook, Google, Netflix, Amazon to name just a few.

Where huge sums of money are made, admirers follow.  Venture Capitalists themselves – names like Peter Thiel or Vinod Khosla – became famous, admired for their fearless ability to identify visionaries, spot trends, pick winners.  Many successful entrepreneurs did and do reinvent themselves as VCs in later life, sharing their hard-won experience with a new generation of aspiring business creators.   In short, Venture Capital plays an important part in the Silicon Valley story, and the characteristics of Silicon Valley have shaped VC.

So why is it needed? Mainly because young companies with cutting edge ideas and/or unproven markets are not the kind of customers that banks will loan money to.  The capital needs of many growing businesses eventually exceed the funds of even the most willing friends, family, or angel investors. If profitability hasn’t yet been achieved or there is a drive for rapid growth, where to turn?

VC investment often fills this role, with its willingness to risk capital in order to super-charge growth.  Policy makers in the 1970s were convinced. The rationale that these VC-supercharged companies, using risk capital from private sources, would become the economic and productivity-transforming powerhouses of the future led US policy makers to cut capital gains taxes on their returns. This made it an even more lucrative investment.

Parts of the VC business model – how they make money from investing in start-ups – are in identifying exciting new technologies that could be transformative, sound business models, and teams with the grit and skill to steer their company through the tribulations of growth.  That is, their success depends on technology insight, strategy and HR.

The other part is solidly finance – invest, manage risk, sell to generate a return.  However in contrast to the “diversify your holdings, manage downside risk, normally distributed returns” model more typically associated with investing, VC depends upon a few huge successes to generate its returns. 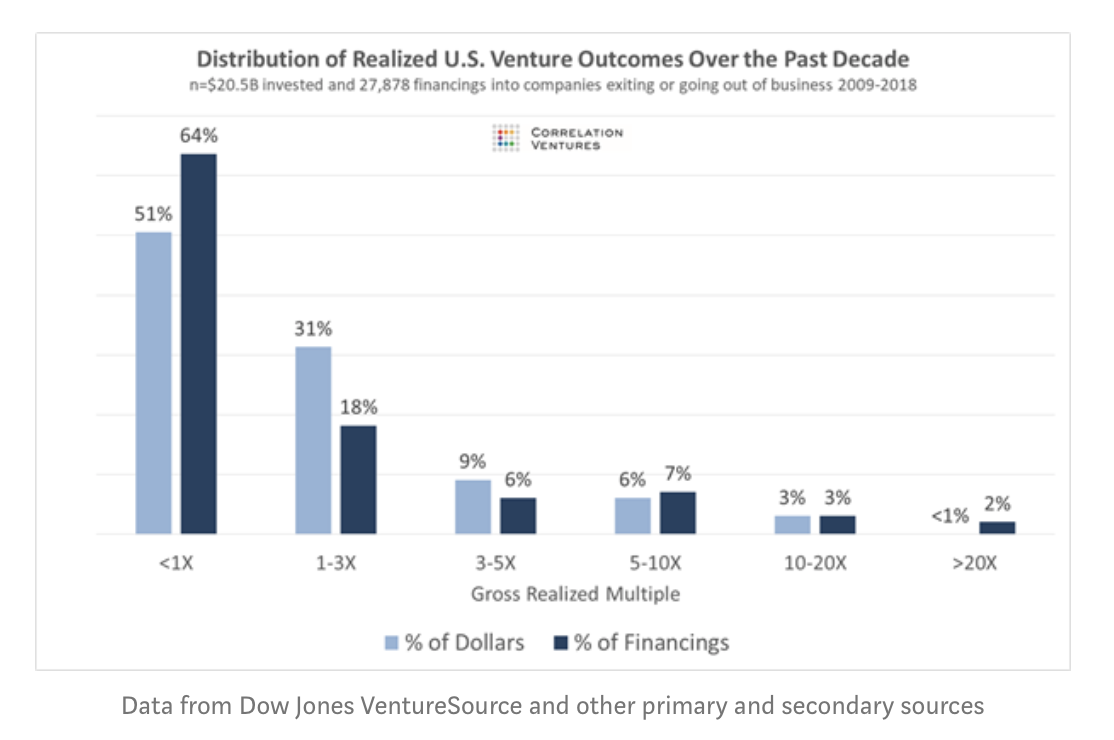 This is because many – probably most – of the companies invested in will fail.  Estimates about exactly how many will fail vary but this is true whether the focus is on businesses in the economy in general (latest UK statistics show 42.4% new businesses survive at 5 years) or start-ups with an aspiration to high growth (The 2011 US “Start Up Genome” project calculated 90% aspiring high-growth companies failed within 2 years).

Analysis in 2019 by Correlation Ventures (Fig. 1) showed that 64% of all companies financed by VC returned a loss.  So the winners have to be all the greater to offset these losses and still create sufficient risk-adjusted returns for investors.

This is the reason idea of the “Unicorn” – the $1bn company that generates massive returns for the investor – has entered the public consciousness.  These out-size successes are the investments that generate most VC firms’ returns (Fig 1) but they are vanishingly rare.

The Impact of VC

The need to find and nurture companies on this trajectory drives a lot of the behaviour of both VCs and the companies that seek and receive their investment.

The pursuit of those infrequent, outsized returns influences the choice of businesses Venture Capitalists will back and the attitude to subsequent rounds of funding.  This in turn affects how start-ups position themselves to obtain investment. For instance it impacts how entrepreneurs describe their technology and the markets they will address (eg “industry disrupting” tech and addressable markets big enough to turn the company into a unicorn), or the activities they prioritise in growing their business to raise the next round of funding (eg growing users or dominating a geography rather than necessarily driving profitability).

The Silicon Valley/Venture Capital model and its associated PR machine has also had a powerful influence on what we think entrepreneurs and entrepreneurship should be.  The aura that surrounds Silicon Valley titans such as Bill Gates or Mark Zuckerberg etc is because they are the successes that transformed their sectors and generated huge wealth for their investors.

These examples encourage LPs to invest capital in the hope of backing the next big thing.  And, much like the outsized personal wealth and influence of footballers like Rio Ferdinand or Ronaldinho encourages aspiring professional sportspeople, these entrepreneurial success stories shape perceptions and convince more budding entrepreneurs to try their hand at startup life.

VC is a great fit for certain types of startups.  But are there downsides?  Yes, absolutely.  Is it a good fit for AgTech?  I’ll explore this in a future article. 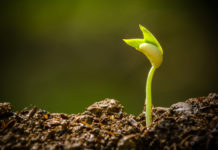